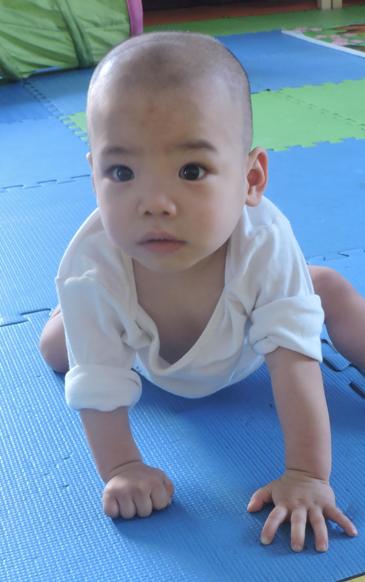 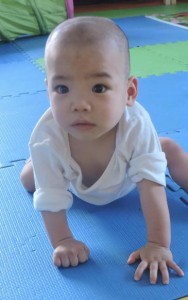 Kenny recently turned two years old. When he was about 4 months old, he was left at a safe haven drop spot at the local orphanage. Kenny has a heart defect (patent foramen ovale) but it is reported to be closing on its own and it’s thought that it will not require surgery. He may have bronchopulmonary dysplasia (abnormal development of lung tissue) which affects premature babies, who are born with underdeveloped lungs. [According to the internet, many babies diagnosed with BPD will recover close to normal lung function, but this takes time. Scarred, stiffened lung tissue will always not work as well as it should. But as infants with BPD grow, new healthy lung tissue can form and grow, and might eventually take over much of the work of breathing for damaged lung tissue.] Kenny received treatment for BPD in March, 2014 and now his condition is improved, with decreased incidents of shortness of breath.

Recently, the orphanage’s physical therapy team has been working on the right side of his body, which seems a little weaker than the left. He is not able to hold things in his right hand. Kenny’s mental development is age appropriate. His physical development is good – he can crawl, sit, and walk holding on. Kenny is very attached to his nannies and loves to play with the 10 children in his room. Can Kenny be the son you’ve been searching for? 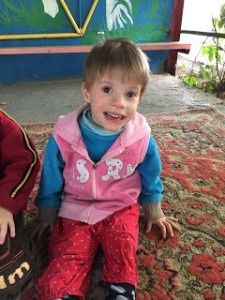