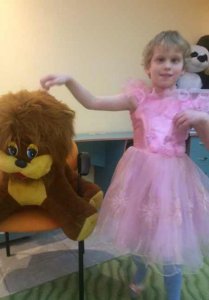 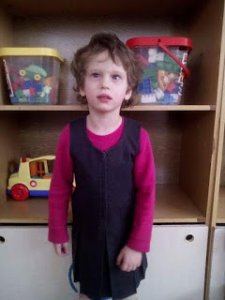 From a volunteer in August 2016:   “I was happy to see that Leena is still the same strong willed young girl as last year. She is available for adoption now! She was a little calmer than last year, but she would still take every chance she got to run around. Just like last year it was obvious that some nurses have a very hard time with her and others love her. She’s much calmer when the nurses like her and she’s easier to handle. It was unclear if she was totally potty trained this year or that she’s still working on it. It was also unclear if she got the diet she needed, but her delays didn’t look worse. Leena is such a wonderful girl! She should be in a family where she has the chance to be who she is, all days of the year.

From a missionary who met her in 2015: “Leena is a strong-willed young girl.  She is stubborn and funny. She loves to explore the world (within the concrete walls she lives between). She has been transferred to this facility in May and she is obviously still getting used to the circumstances of living. She had a lot more freedom in the baby orphanage she came from. Leena can walk (so don’t be fooled by the picture), she can run, she is very energetic. She can drink from a cup. This summer (2015) she was being potty trained. She doesn’t talk. She squeals when she is very excited. She is probably the size of a 3 year old at the moment (summer 2015). She probably understands what is being said to her, but she has a hard time following orders. Due to her PKU she needs a special diet and medicine. The baby orphanage she grew up in, didn’t provide the proper care. So (part of) het mental delays may be caused because of that. The facility she lived in right now, tries to provide the proper care. They do not receive funds for it, so they raise it themselves with a charity fund. They really try to take good care of her. Some nurses really like her. Other nurses have a hard time dealing with her, because of her energetic ways. She likes to move and run around all the time. As soon as you let go of her hand or take her out of her wheelchair, you have to chase her. As soon as you give her an opportunity she’ll take it. Some days she was tied up in a wheelchair and we thought she might have been drugged. She didn’t react, she didn’t smile, she didn’t interact. Until the moment my fiancé pulled her from the wheelchair and it was as if she came alive again. I have not seen any selfharming behaviours and I haven’t seen her hurt other children. I have also not seen her interact with other children at all. The nurses don’t like it when she gets all excited, but for me it was a sign that she was not so institutionalized yet. There was so much fight in her. I hope she finds a family before she loses the strength to fight and before her delays will get worse, due to a lack of a proper diet and medical care.”

A Family for HENRY 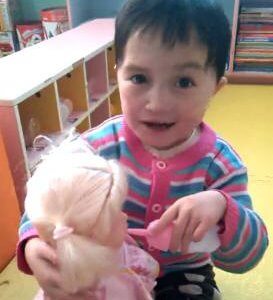