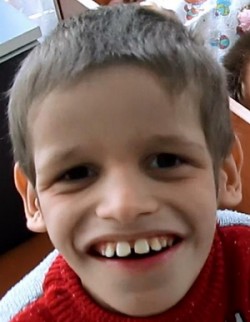 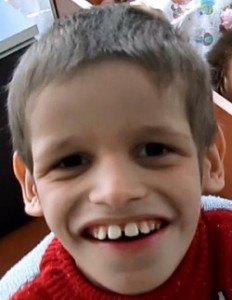 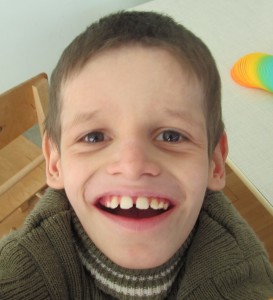 Adam is a sweet, easy to please little cuddle bug. He is very much like a cuddly, curious little toddler. When I first met him he did not seem interested in me at all, but as time went by he began to want affection, and would grab my hands if I stopped rubbing his head and put them back on his head.

One day I picked him up and from that moment on he wanted to spend most of my time there in my arms. When I arrived he’d jump up from his little wooden chair, and hurry over to me with his arms raised. If I didn’t pick him up fast enough he’d try to climb up into my arms using nearby chairs or beds, and he would not hesitate to grab items from my hands and set them down to free up my hands so I could hold him. He also began to cry whenever I left. He loves wind up toys and toys that vibrate, and would giggle happily and flap his hands to show how excited he was about them. His other favorite toys were a pony he enjoyed chewing on, any sort of car, and some legos that made a train. He is not verbal but was beginning to make noises to communicate. I tried to teach him to sign more one day, by signing hand over hand with him. When I asked him to sign it he took my hands and helped me sign it. He seems to me to have a need for love and affection that can only come from a loving family. I would love to see him thriving and meeting his full potential, as well as bringing joy to as many people as possible!