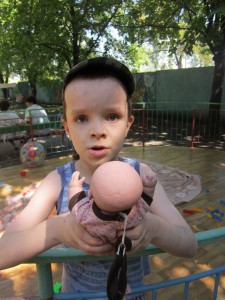 July 2016: NASH HAS BEEN TRANSFERRED TO THE INSTITUTION :(

From a volunteer who visited with him in July 2014:  ” Nash is still this very small boy. He has the size of a pre schooler. He is really cute though. He loves to have a man around. He showed my boyfriend all around the place. He loves to blow little wind mills and play games together. He doesn’t really speak the language they speak in his country, but he does make all kinds of ‘words’. He actually tries to make you understand and every now and then there will be an actual word in it, which makes it easier to understand what he says. He is potty trained and he understands language and knows quite well how to read the body language of the nurses. He’s a big help for the nurses, he carries toys inside and pushes wheelchairs. We suspect that he has some kind of visual impairment. He had the glasses of my boyfriend on for a moment and he seemed to be able to see much more, but I’m no eye doctor, so I can’t say for sure. All I can say is that this boy desperately needs out. He is quite healthy and he needs a family where he can blossom. He is an amazing boy and I have tons of pictures and a couple videos of him, where he shows his own goofy self. So please don’t let this boy wait any longer. Many of his friends from the orphanage have been adopted, but he is still listed. I want him out there! I want someone to see his potential and love him all the way home!

From a family who met him in Dec 2013: He seemed to be rocking more persistently. I noticed when music was being played or when we would actively engage him play he would rock nervously. However, he is a wonderfully sweet spirited child and is eager to please. He would always great us with a formal, “hello” and then lead us to take a seat. He never missed an opprotunity to rush out of the groupa and jump in our laps or include himself in whatever game we were playing with our boys. He so desperately wants to be loved. He called me, “Mama” and it broke my heart…how I wish I could have taken this precious boy as well. There were many days that we noticed him strapped to a chair or straight jacketed; I am not sure why because I never saw any self injurious behavior from him. He is very impulsive and easily excited but his joy simply radiates a room. He desperately deserves to be loved, valued and wanted….he only aims to please. The first thought that came to mind upon meeting him was, “He does NOT belong here”….he is so smart…though his speech is often slurred; but only slightly. He seems to be minorly effected by his hydrocephaly and gets along very well. His poor little hands do shake though; probably as a result of the pressure on his brain. I am unsure if he has been shunted or not; I felt around his head one day and did not feel the bump that would indicate he has. If he has not been shunted then that makes his case even more urgent. He desperately needs out! This boy has ALL the potential in the world…he just needs the right parents to break him free!  I also have a video with him in it, if a family is interested.

From someone who met Nash in 2012:  Nash is a wonderful little boy. He is always quick to excitedly greet visitors with happy squeals and a formal hello, and is quite insistent visitors take a seat in the chair he brings over to them 🙂  He is very helpful and obedient, and will sometimes bring toys over to the smaller kids in his group who cannot get toys for themselves. He is very talkative, but a lot of what he says is sort of like “Nash”-ese. He has no problem getting his point across, however, if it is important to him that you understand him! He likes to play with just about any toy; balls, legos, cars, light up toys, you name it he will play with it. He enjoys being silly and laughing, and especially thrives with one on one attention. He is generally a happy little guy, but does not like messes or rule breaking, and is not afraid to tell the other children “No” or try to right their wrongs if they are misbehaving. He very much aims to please! I feel Nash would adjust easily to and thrive in a family! 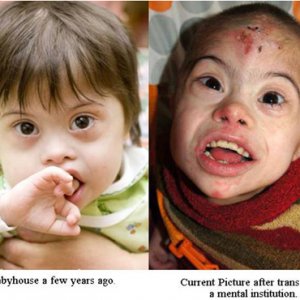 I Will Never Stop Praying
Scroll to top