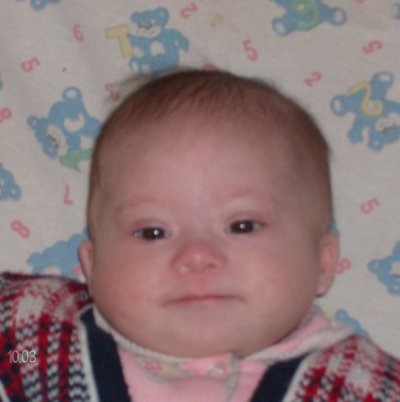 From an adoptive family who visited with her in 2011:  When I held Elaina she melted into my arms and cuddled up close. She appeared to be about six months old but the director said she was approximately 10 months old at the time. Although she is small, she has the most adorable chubby cheeks and is surprisingly well-fed compared to the other children we saw at this orphanage. The director explained Elaina is a favorite among the workers because she is so sweet and affectionate. We were told she is “very healthy” with “no heart issues.” While I held her she made eye contact and held it. Her eyes were very dark and expressive and she smiled up at me the entire time. She is still so young and would absolutely thrive if adopted soon. The orphanage is in a very poor region and is run down. The children with special needs do not receive any therapy and are treated differently from the other children. However, the director is kind and loves the children and especially wants to find families for the children with special needs because she said “they have no future here.” She also told us Elaina has been in the orphanage since birth and was “rejected at the hospital” by her birth parents.

***This child is in a country that is currently not accepting new commitments. We can no longer accept grant donations or inquiries for this child, but we have not given up on any of these children and encourage all of our Prayer Warriors to continue their efforts! When and if this country program re-opens for adoptions, we will relist this child and begin seeking an adoptive family immediately.***

BRIGITA for the Etheridge family — NC
Scroll to top