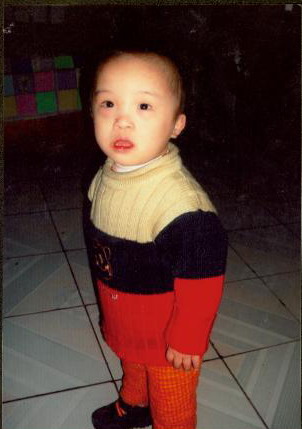 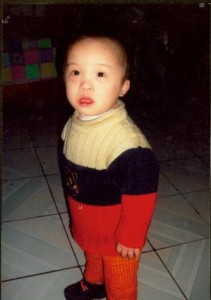 Since July 2007 he has been with a foster family. Per report written in 2010: At the age of 36-39 months he can walk alone quite steadily, and when he was walking he can stoop down to pick up the toy on ground and then go on walking. At present he can only call “baba”, but he can express his desire in body language, and if he wanted to drink water he will put his hand beside his mouth and look up. When he wanted to defecate or urinate he will make the sound and show actions familiar to his mother. Since he had learned to walk he had been very interested in outdoor activity, and he went to play games with other children in community every evening. He liked pulling his mother to go to the supermarket near to their home, and when they got there he will point at what he liked. He was very close to his father, and when his father came back home he will go out to welcome him.

At the age of 40-42 months he was very active, liked going out to play, even in cold days. He still did not speak much, besides father and mother he can say other words unclearly with the help of adults. He had to be fed, but he can drink water alone with cup with suction tubes. 43 months-present it has been too cold and he stays in house for most of the time. He likes to watch TV, and if there are children dancing in the program he will learn from them. He likes eating meat and is not choosy to food. He naps for 1-2 hours and has deep sleep. Sometimes he sleeps with adults, and sometimes he sleeps alone on his own bed. If he wants to go to toilet he will crouch and pull his trousers to tell adults sometimes. If adults remind him of going to toilet he will do so but they have to help him take off the trousers. He is very strong and seldom falls ill.

CHELSEA for Karen and Darren — WA Scroll to top