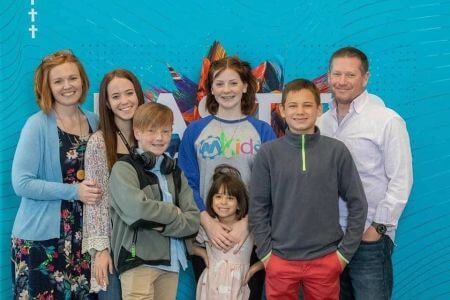 Meet the Bryant family! Jeremy (40), Patricia (39), Justice (16), Chance (15), Liberty (14), Journey (13), Victory (8). The Bryant family is at it again! Since Jeremy and Patricia were married 18yrs ago, they knew they were meant to adopt. They knew their lives were going to be used to care for orphans. Jeremy and Patricia served in Botswana, Africa as missionaries working in the village of Maun and surrounding areas, serving with the school, the orphan care, church, HIV/Aids ministry, etc. Shortly after arriving, they started their family. After three years there, they returned to the States with their three bio kids, where Jeremy would join the US Army as an active-duty Soldier, and is currently still serving on active duty.

Shortly after his first deployment, both Jeremy and Patricia knew the time had come for them to venture into adoption. Not knowing how, when, where, or anything else, they trusted the Lord would show them what needed to happen and when. The adoption road is a scary road full of ups and downs and twists and turns. But Jeremy and Patricia knew for certain one thing… the Lord had called them to go and adopt. They were saying yes to the Lord’s leading and not backing down. December of 2017, Jeremy and Patricia adopted their 8-year-old daughter, Victory. Then, shortly afterwards, December 2019, they finished their second adoption of their oldest son, Chance Zane. Over the last two years, even through Covid, they’ve watched all 5 of their children blossom into who the Lord wants them to be. They’ve grown in wisdom, knowledge and skill and have grown so deeply together through all the ups and downs.

When they finished that last adoption, they didn’t think they’d be adopting again, but obviously the Lord has different plans and the Bryants, as a family, are all emphatically saying yes one more time to adoption! The adoption of Finley! The really neat part of this is that Jeremy and Patricia Bryant met Finley the same day that they met Victory, 4.5 years ago. At that time, they were in the same baby house orphanage. Since then, they had advocated for him, prayed for him and shared his story with many people. But the time has come. No more waiting and advocating. Finley has been a part of the Bryants in their hearts since the day they met him and it’s time to make him a part of their lives for good. The Bryant family is so excited to gain another son.