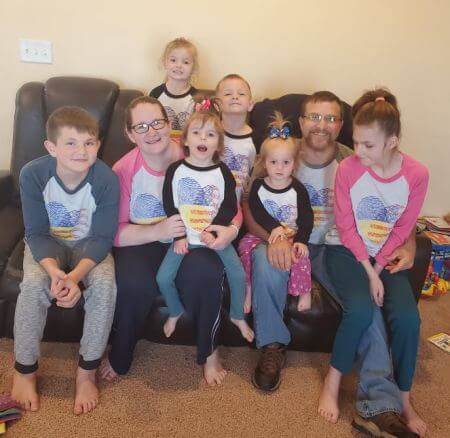 Chris and Melina Birkenfeld were longtime friends before they started dating the summer before her senior year.  It didn’t take long for each of them to realize that they wanted to spend the rest of their lives together.  Although Melina was young (just about to turn 19) when they got married, she was the oldest and only girl in her family of five children and she knew she was ready to get married and start a family. Chris was also from a big family of eight children. Both Chris and Melina knew that they wanted to have at least four children.  A couple of months after they got married, they were excited to find out that they were expecting.  Ten months later, Ella was born. When Melina was seven months pregnant with her second child Ian, the couple found out that Ella had a genetic condition called Angelman syndrome. There were so many unknowns for this young couple, but they devoted their time to making sure Ella received the therapies and things she needed to thrive.  About four years after the diagnosis, Chris and Melina talked about adding more children to their family. It didn’t take long, and Bensen, Liberty, and Lila were born into the family.

In July of 2020 Melina was browsing through Facebook and saw a fundraiser for a little girl with Angelman Syndrome. When she finally took the time to click on the link to see the little girl, it was like God was calling Melina to her! Long story short, the family was all on board to adopt this little one and on April 13th, 2021 Yaroslava (Yara) Faith Birkenfeld joined their family!

While compiling their dossier paperwork for Yara’s adoption, Melina fell in love with a special little boy! Originally, the couple had been approved for two but they had to be siblings. After Yara’s adoption Melina thought the adoption doors were closed as fundraising was a challenge the first time and so was the time it took to get a completed dossier.  God had other plans, and doors were opened for the couple to adopt this sweet little boy! Once again, Chris thought Melina was crazy lol! However he prayed and pondered and soon he was on board!

They have been amazed to see how much Yara has thrived with a family, and can’t wait to give this little boy the life he deserves! He will have parents and six siblings who will love him unconditionally!! They are extremely grateful for any help that is given to them as they work their hardest to get their little man home!! Much love and God Bless

$9,067.69 has been donated towards the cost of our adoption!
August 28, 2021/by Michelle Zoromski
https://reecesrainbow.org/wp-content/uploads/officialrrlogo340themerequiredsize.png 0 0 Michelle Zoromski https://reecesrainbow.org/wp-content/uploads/officialrrlogo340themerequiredsize.png Michelle Zoromski2021-08-28 15:22:352022-01-17 14:34:23A CHILD for the Birkenfeld family -- TX
TIPPI for the Sheffer family — MD A CHILD for the Wurdeman Family — MO
Scroll to top