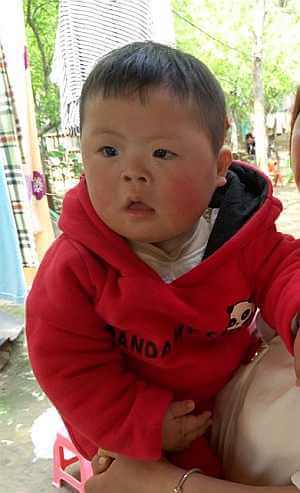 I am happy to introduce you to the Umstead family. They are a family of 11! Tom and Heather have 4 biological children who are all adults. Tom, along with his brother-in-law, father-in-law and son, own their own business where they cut trees and sell the timber. Heather stays at home with the kids and grandkids and cares for the home duties.

The Umsteads had their children young and were just reaching the time in life where things were starting to slow down, and they were looking forward to more time with each other and possibly some traveling. About that time, they began to feel a nudge from God to be completely surrendered to Him. They wanted to give their lives back to God so He could use them as a blessing to others. That is when adoption was placed on their hearts. Not just adoption but they researched and found the greatest need was children with Down syndrome. Asia in particular had a great number of boys with Down syndrome in orphanages.

Enter their 4th son, Samuel! Samuel was adopted in 2017; he was 3 when the Umstead’s brought him home. He has Down syndrome and an extra surprise of Autism. Samuel fit into their family like only God could do. Autism was not a disability they thought they were open to, but they would not change a thing about Samuel. They were over the moon about Samuel and did not plan on a return trip to Asia. However, during the visit to the orphanage, Tom met Joy (formerly Caroline on RR). Joy shared a crib with Samuel, and they lived in that small space together for 3 years. So as soon as they returned to the US they began advocating for Joy. When their year was up, and no one submitted for Joy they knew they had to go back for her. Joy came home in 2019. Joy rocked the extra chromosome along with a heart defect that eventually will need another surgery, but you would never know! Joy is amazing! She is such a quick learner and is thriving in her new family.

Prior to adopting Joy, the Umstead’s learned of a little guy in the same orphanage as their children. His name is Auden, and they were drawn to him. During the visit at the orphanage when adopting Joy, they asked to see and spend time with Auden. They were able to see him but were not given permission to interact with him. Auden was not doing well. They committed at that moment to return for him as soon as possible. They spoke with friends and were able to get Auden out of the orphanage and into a healing home until they would be permitted to return for him.

That takes us to today. The Umstead’s have submitted their dossier and they are just waiting for the travel suspension to be lifted so they can make their final trip to bring home their last son,  who will be named Moses John.  Along with your financial support (because fundraising is hard with Samuel and Joy) they would appreciate your prayers.