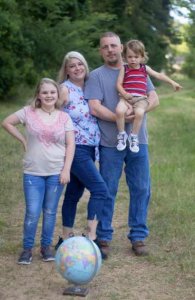 In February of 2020 Amanda and Jerry were exploring the idea of adopting, this being Amanda’s lifelong dream to be an adoptive mother they felt they were finally at a point in their lives where this was possible. After having a home built with a growing family in mind, they moved towards finding the right organization to help them on their journey. Amanda was speaking to her sister Ashley who lives in San Antonio and she told her about Keisha Melton and Reece’s Rainbow who advocate for children all over the world.

It was in that moment they decided to explore international adoption. Amanda and Jerry were on Reece’s Rainbow looking at children all over the world, Ashley was also was searching and sending photos and stories of children. When they saw Izak listed on Reece’s Rainbow it was instant. Instant love, instant devotion, the I will stop at nothing feeling. After researching and finding where he was in the world, they realized they would need to start to fundraise to be able to bring Izak home.

Amanda started a power washing fundraiser skeptical if it would take off and be something big but turned out it was just the right fit to start the process. On Mother’s Day Jerry contacted Nancy and committed to Izak. It was in that moment Amanda felt the love and devotion Jerry had to the adoption. After two weeks of starting the adoption process Nancy reached out to let them in on a little surprise. Izak has two sisters. They were shocked; they started an adoption for one child, and now there are three children. They were given the options, petition to separate the children, adopt all 3 or find another child. There was only one right answer, God had led them to Izak he knew before they knew. They knew God had planned this all along and he showed them Izak to bring them together.

Jerry and Amanda have two children at home, Andrea who is 14 this year and Jeffrey who is 2 years old. Andrea is extremely excited to have more siblings. Andrea is big on gymnastics, has been in it for over a year, decided to take a break so that the family can use the funds to bring her siblings’ home. Her devotion to her siblings has shown her parents true love, she’s pressure washing on the weekends, making jewelry after school and cutting down on wants to insure this is possible. Jeffrey is still to young to fully understand the adoption, but he knows mommy and daddy are bringing home his brother and sisters. When asked if he’s ready he says YAAAAAA. Thank you for helping bring their new siblings home!