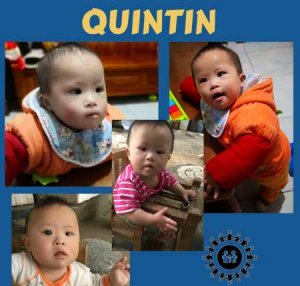 Quintin is an adorable and active little boy, born in September of 2017 with Down syndrome. In December of 2017, he was moved into a foster family. He quickly grew very attached to his foster uncle. When he see his foster uncle, he will ask him for hug and kiss him! When the uncle takes him to play outdoors, he yells “yiya” happily. Quintin is afraid of strangers. If a stranger hugs him, he will cry loudly if he doesn’t see his foster mother or uncle right away. Quintin’s file was prepared when he was one year and nine months of age. At that time, he could walk while holding onto an adult’s hand and could even take a few steps without holding on. He was saying one or two words at that time, such as “baba” or “ajie.” Quintin could be naughty at times. He liked throwing things, especially if it was something he didn’t know how to play with. He can understand adult’s simple instructions. His foster family was working on potty training him. They describe Quintin as sunny, busy, and smiley and say that he loves outdoor activities. We are hoping to get an update for Quintin and that his forever family sees him while he is still a little guy too!

There is a $2,000 agency fee reduction for Quintin’s adoption with his current adoption agency.