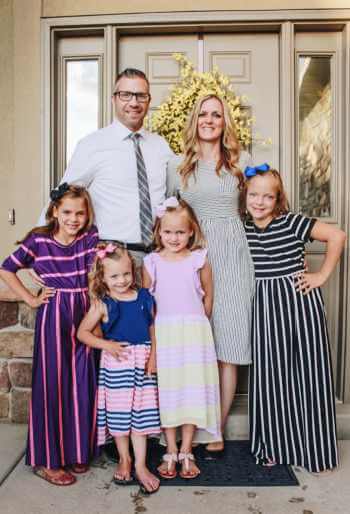 Aden and Jamie Hirtle’s story began in 2000 when they met at a college in Rexburg, Idaho. Aden is originally from Nova Scotia, Canada and Jamie is from Utah so this meeting felt like divine intervention. They became good friends and remained friends for 8 years, despite Aden’s move back to Canada in 2004. In 2008, they were reunited, began dating and were married in 2009. They lived in Calgary, Alberta, Canada for 7 years and then moved to Utah in 2015 and have been there ever since. In their 12 years of marriage they have welcomed 4 biological daughters.

In May 2020, Jamie randomly happened upon a social media account, which advocates for children in Eastern Europe with special needs who are available for international adoption. This page pulled at her heart as she had lived in Russia (a nearby country to the children on this account) where she had taught young children and had even visited an orphanage while there.

On this social media account, she was stopped in her tracks when she saw a picture of a boy who looked like her own children. This is the moment that changed everything. After much prayer and research, Aden and Jamie decided to start the adoption process for this little boy.

In November 2020, they submitted their dossier and began the wait for a travel date. But adopting this sweet boy was not meant to be. He became unavailable for adoption at the end of November. This boy put the Hirtles on an adoption path that they wouldn’t have been on otherwise. Aden and Jamie decided to continue with the adoption and are now hoping to adopt a little girl. If all works out, this little sweetheart is going to have 4 older sisters who will love her and dote on her, let alone a mom and dad who will love her fiercely and who will take care of her medical needs.
Jamie and Aden have fundraised (and continue to fundraise), cut back on expenses, applied for many, many grants and have worked extra shifts to get the funds for this adoption. They still have a ways to go financially so any donations would be a great blessing to get them to the child intended for them.

$4,215.80 has been donated towards the cost of our adoption!
September 24, 2020/by Michelle Zoromski
https://reecesrainbow.org/wp-content/uploads/officialrrlogo340themerequiredsize.png 0 0 Michelle Zoromski https://reecesrainbow.org/wp-content/uploads/officialrrlogo340themerequiredsize.png Michelle Zoromski2020-09-24 22:08:032021-01-13 18:59:50A CHILD for the Hirtle family -- UT
Vinny for the Castaneda family — TX A BOY for the Lemin family — OH
Scroll to top