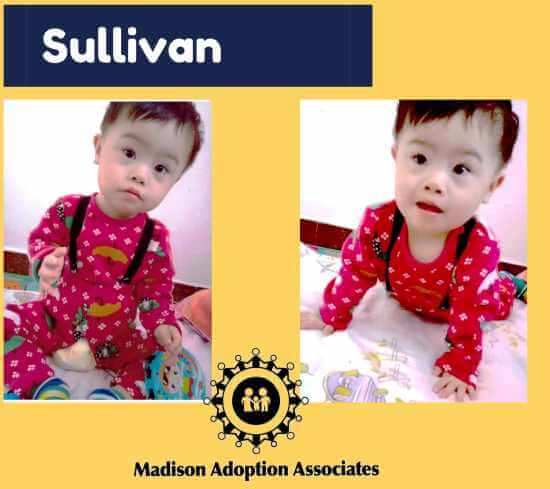 Sullivan is precious! He lived in the orphanage for about 4 months before being sent to live with a foster family. Sullivan eats soft foods and likes sweet foods. He doesn’t like rice and acidic food. Sullivan’s development is delayed and he weighs less than a child his age should. He needs a lot of help from his foster parents. Sullivan can roll over and he likes to stretch his hands out as a sign for his foster parents to cuddle him. Despite his delays, he is said to be clever. If he wants his needs met, Sullivan will makes sounds. If his foster parents respond to him, he stops making sounds. If his foster parents don’t respond to him, he continues making sounds. Sullivan can visually track moving objects, including his foster parents, and laughs when he is amused. He knows his name and turns to respond when called. His eyes are so bright and he keeps his eyes fixed on whoever is talking to him. Sullivan is hesitant of strangers, but likes to interact and play games with his foster family. Sullivan’s file is brand new, but the agency is requesting an update in the hopes of getting some video of him!

There is a $1,000 agency fee reduction for Sullivan’s adoption with his current adoption agency