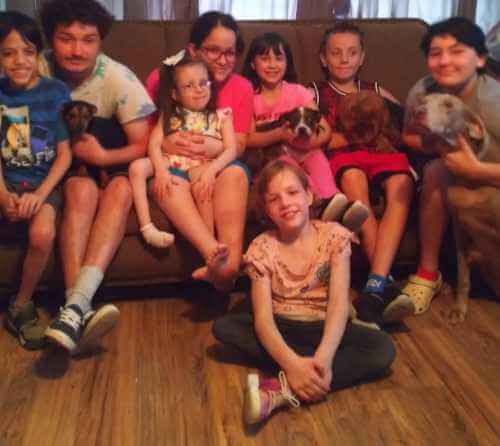 Gary and Denise became members of the Reece’s Rainbow Family in 2006. First by advocating and supporting International Adoption for Ukraine and children in Eastern Europe. After adopting both Makayla and Patrick in 2000 and 2002 they wanted to return to adopt but decided on adopting from Bulgaria Chrissie 2009, then Jake and Gennie in 2011 from Bulgaria. Sadly Gennie died of complication of organ failure from her Cystic Fibrois shortly after arriving in the US. Little Jake also suffers from Cystic Fibrosis. But the Davis Family devotes their love and time to caring to ensure Jake gets the very best medical care. After Gennie’s death the Davis family hearts ached. But also the Davis family heart was for another little girl so their hearts were led to Ukraine and adopted not one but two little girls Penelope and Katya. As time quickly passed by read of a little girl Sophia who needed major ortho care and a young man they named Grayson who received a donor kidney. These two children needed out quickly to survive and without medical care Grayson would have died. And Sophia now can run and dance like other children.

Advocating for Reece’s Rainbow did not end after their adoption of Grayson and Sophia in 2019. Denise followed each child as they were listed and daily prayed each found a home. Speaking to many families through her blog she shared her journey with the assistance of Reece’s Rainbow. Many times there would be certain children or families who touched Denise’s heart. So she helped by donating and advocating to families adopting. This pass year there was a particular little girl with two healthy sisters. Her name on Reece’s Rainbow but not her given name was sitting on a couch watching her sisters play. This particular video Denise watched over and over. Each night the girls were in Denise’s prayers. Soon the entire family prayed for this little girl. She sat in an old blue pair of pajamas as her healthy sister dressed in party dresses. Both playing with dolls and pushing doll strollers. Watching a video of a small girl who so many people viewed yet never inquired or cared. As months passed she sat once again on the same couch but this time alone. Her precious beautiful healthy sisters were chosen for adoption. Makes one ask themselves why not little Cassandra also. Make children like Cassandra are over looked. Her clothes still old and mismatched. Could they have placed a pretty dress on her? Add on a big beautiful bow? Made you wonder if she knew her sisters were not coming back. Knowing this one little girl once she is 4 or 5 wll be moved to an older child’s orphanage or even worse an adult institutional setting. Yes there are thousands of orphans in the world but not one child out of the thousands chose to be an orphan. Not sure if many of you have visited an orphanage. The Davis family and their adopted children can tell you this is not a home nor a family. Children need a Father a Mother, sisters and brothers. And maybe a few cats or a dog to snuggle with and play ball with.

No child as they grow up wonder why they were not in a family. Many times families do not adopt because they are unsure or afraid.. Adopting a child involves a ton of paperwork, many tears, many prayers and yes one adoption can cost over $34,000. Without prayers, love an support of others through donation can not be possible. Please in your heart Take that Leap. The Davis Family prays that the funds they need are provided as needed during their adoption. Every dollar goes to saving a little girl or boy sitting on a couch alone or laying in a bed.