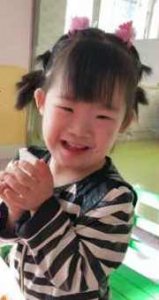 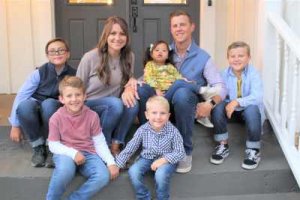 Nathan and Stephanie Faught have been married for eleven years and have five wonderful children- three biological and two born in their hearts. During their engagement, the Lord started drawing them to hurting children through a ministry that serves families in the inner city. With big hearts and an open door policy, Nate and Stephanie quickly began filling their home with children to love, both biological and through the inner city ministry. Within the first five years of their marriage, they were parents to three babies/toddlers, and a teen. Although it seemed crazy to many, the Lord was all in it! He was clearly leading them down a path unlike what they had planned. As Proverbs 16:9 reminds us…”The mind of man plans his way, But the Lord directs his steps.” From early on, they just wanted their steps ordered by Him.

In year 8 of their marriage, the Father brought them a handsome brave seven year old boy! What a gift this boy was to them. Amazingly, he is now their son. Many asked how they were able to take on so much, and their response always pointed others toward God. They continuously re-mind others that this journey of adding children to their family is His call on their lives. Adoption has come with it’s challenges; yet through the hard times, the Lord has always been faithful.

Fast forward to the following year… at a time when Nate and Stephanie just knew they couldn’t handle anymore changes in their lives… the Father placed a precious three year old girl into their laps. She came to them “just for respite”… two to four weeks max. God sure has a sense of humor because that little sweetness is now their daughter. AND… the most incredible part is that she has Down Syndrome. A special need the Faughts had never considered. In fact, they were quite intimidated by raising a special needs child…. BUT GOD… when they saw her picture… they did not see a child with Down Syndrome. They saw HER! She was a precious soul in need of love. They quickly learned that she was no different than the other children the Lord had brought them!

Adding her to their family has changed all of them in such a beautiful way! It’s one thing to read about the millions of orphans living in institutions and feel sad for them. But when someone be-comes mommy, daddy, or brother to one of those children, a true passion is developed. They’ve experienced first hand how being orphaned truly affects a child, and they all long to see each of these children find a forever family! The Faughts have also been shown the true value of these precious ones with special needs-specifically those with down syndrome. The Father showed them that while many have labeled these children a burden, they are truly one of His greatest treasures…fearfully and wonderfully made by Him.

This summer, a dear friend of theirs had an amazing opportunity to visit an orphanage in Asia to check on a handful of waiting children. The day she visited them, the whole Faught family was praying that each child would feel the Father’s love through her and that they would finally be found by their forever families. When the friend returned home, she posted pictures of the children she had met. Stephanie and her children sat at the table looking at their precious faces. When they came to a picture of a little girl with down syndrome dressed in yellow, their oldest son proclaimed, “Mom, that is our sister! Can we adopt her?” The other children quickly chimed in, “yes, mom, please!!!” Stephanie simply replied that they would just have to pray about it. When Nate returned home from work, he was met at the door with a picture of this sweet girl and begging little boys. He echoed Stephanie’s response that they just needed to pray. The brothers united together telling him that they pray for orphans all the time and they just knew this one was their sister. That week, they watched as their children prayed with such fervor. Nathan and Stephanie prayed too and the Lord confirmed that she was indeed their child! When Stephanie reached out to her friend to get some more information, her friend told her that the little girls advocacy name was “Stephanie”. She laughed out loud and thought to herself, “well, of course it is”.

The whole family is so excited to bring Stephanie home, hopefully early next year. They would love to see others join them on this journey, and they thank you in advance for all of your prayers and support!