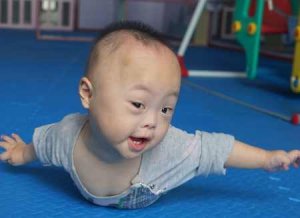 Scotty looks like he is ready to fly into your arms!   His update is from October of 2017 and says the following:  Scotty is now ten months old.  He is very cute and likes stretching out his tongue, has less slobber, likes the caretaker touching him and talking to him face to face. When the caretaker did the passive exercise and moved his limbs, he can stare at the caretaker, and sometimes he makes sounds of “enenen” to respond. He can change from supine to prone position, prone to supine position with turning over at 360 degrees. He can lean forwards and sit alone for a while with his hands propping. When he is prone on the mat, he can prop with both hands to raise his head, can move his head and neck freely, can prop with one elbow with the other hand picking the toy before him. When he is happy, he can use the belly on the mat, open both arms and raise both feet, “flying” position. When he was supine on the mat, he can use one hand to pull the toy hanging under the toy shelf before his chest to wave it, or use one hand to stir or move the toy on the toy shelf to make it turn or move, also can hold his feet with both hands. He can put off socks when he is naughty. When holding him erectly, you do not need to hold his neck. He can track the moving toy left and right with his head and eyes. When he is sitting against the caretaker or in the children’s chair, he feels comfortable. He can grasp the toy when it is passed before him, he can hold one toy in each hand. When the toy drops, he can take a look. He likes interaction with the caretaker. When the caretaker plays hide and seek and puts the towel on his face, he can remove the towel. The caretaker often lets him lie prone on the bucky ball, so the ball can practice his waist muscle as it turns forwards and backwards. He knows his name. When calling his name face to face, he can gaze at you. When the familiar caretaker calls his name, he can turn back to search for the sound source. He likes his caretaker. When the caretaker stretches out her hand and says “ mom hugs you”, he can reach his hands to the caretaker. The caretaker cuddles him up and says “ touch mom’s face”, he can stretch out hands to touch mom’s face. He rejects the stranger. When the stranger calls his name, he can stare at the stranger. But the stranger hugs him, he cries. When sent to his caretaker’s arms, he stops crying. In the sunny day, the caretaker often takes him to the garden to enjoy the sunshine and breathe the fresh air.

Could you be darling Scotty’s forever family?