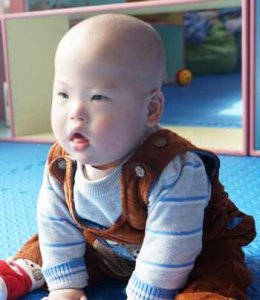 This little cub is Shane!  He has an update from May of 2018, when he was 14 months old:  Shane is a cute, strong and chubby boy. He can stretch out tongue, has less saliva, can roll over at 360 degrees from supine to prone position and from prone to supine position, and can prop to sit forward with hands. When he is lying on the mat at prone position, he can prop to raise head and chest with both hands, could move his head and neck freely, could prop with single elbow, pick up the toy before him with the other one and put into his mouth to bite. When he is lying on the mat at supine position, he can watch his hands before his eyes, and can hold both feet and wave. He can grasp and wave the toy when it is passed to him. He can hold one toy in each hand, exchange the toy from one hand to the other one, and put the toy into his mouth and bite. When he is held erectly, he can move his head and neck freely, can track moving toys with his head and eyes. He is comfortable when he is sitting against the caretaker or in the children’s chair. When the toy is dropped, he can look over. He likes interaction with the caretaker. When playing hide and seek, he can remove the towel if put it on his face. When the caretaker blows to his brows, he can close his month and narrow his eyes in a line. The caretaker often pulls his hand to pat or puts his hand on his month to beat WOW. After stopping for a while, he could stretch out hands to pat or beat WOW. The caretaker often lets him lie on the bucky ball to practice his waist muscle as the bucky ball turns back and forth. He knows his name a little. The caretaker calls his name, he stops a while and looks over, responds “a” once sometimes. When the caretaker’s voice is serious, he cries. When the caretaker teases him softly, he laughs happily. He does not reject the stranger to hold him. The caretaker often takes him to enjoy the sunshine and breathe the fresh air in the garden when it is sunny. He has a good appetite, can eat steamed egg, fruit puree, little steamed buns and nutritious congee, etc.