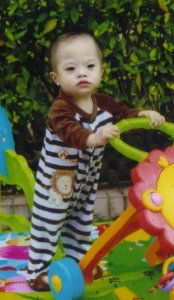 Grey has such beautiful eyes! His report is from May of 2017 so he really needs an update. The report says at 6 months old he could wave his hands and was happy. At 9 months he could reach for toys and hold milk bottle. When he was 12 months old Grey could turn from lying down to facing down and he could use one hand to hold his body weight. He could also sit alone and reach for stuff with his fingers. When he was 1 year old and 2 months, he could poke or pull objects with thumb and other fingers and drop stuff. When he was 1 year and 4 months old his hands and mouth movements were coordinated. At this age Grey is also starting to talk. He pats small balls and toys. He smiles at familiar people. He reacts to unpleasant sounds. He turns easily from crying to laughing. He stares at strangers when they enter his room, and becomes shy. He likes hugging the nurses. Please let us know if you would like an update of this great kid and don’t forget to check out his video!