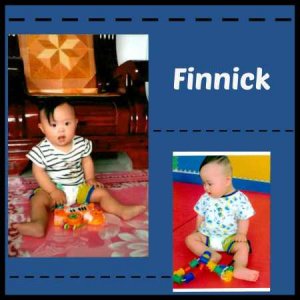 Finnick is a handsome little boy, born in June of 2015. Shortly after coming into care, Finnick was moved into a foster family. He has a good appetite and really likes to eat noodles, but does not like sweet foods or yogurt. Finnick gets along well with his foster family and likes to be with them. He is reported to have an abundant amount of expressions and his foster mother says that Finnick often makes sounds. When his foster family coaxes him, he will smile and laugh out. When Finnick is unhappy or uncomfortable, he will make noise and cry. When someone calls his name and wants to hold him, he will stretch his hands out to embrace them. Finnick can find the source of sounds and his eyes move to follow his foster mom when she is walking around. Finnick falls asleep easily and sleeps well. At the time his file was prepared, Finnick’s motor development was delayed, but he could turn over by himself and sit independently. When he wants to get something on the ground, he will make an effort to move his body. Finnick will make sounds of “dada” when he is playing happily in his walker. Finnick likes listening to music and will listen attentively and quietly. Finnick was born with Down syndrome and CHD-ASD (secondary hole, multiple); expansion in the right atrium and ventricle; thickness in the fore wall of the right ventricle; tricuspid regurgitation. We are hoping for an update, but can’t wait to see who Finnick’s lucky family will be!

There is a $2,500 agency grant for Finnick’s adoption with his current adoption agency. 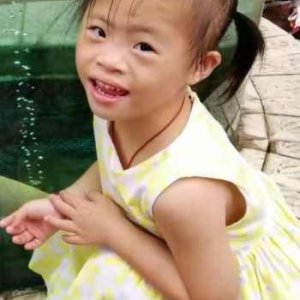