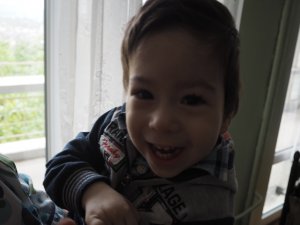 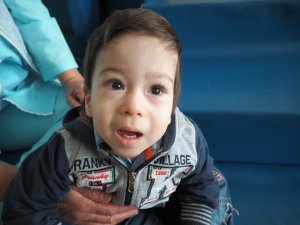 Yager loves the company of the adults. He likes to be engaged in play and laughs when interacted with. He has a special relationship with one of the staff members, who always accompanies him for operations and for check-ups. While lying on his back, he can turn on his abdomen, he pulls himself up with his arms. The muscles above the waist are very well-developed. He will reach for an adult and when you extend your hands, he immediately pulls himself to the sitting position. He eats from a bottle while holding it himself. When he sees toys, he reaches for them and tries to get them.  If he gets upset he easily calms down if cudded.

He repeats syllables and pronounces sounds. He holds toys in his hands and knocks them together. He can follow simple directions.

Photos and videos are available through the agency.