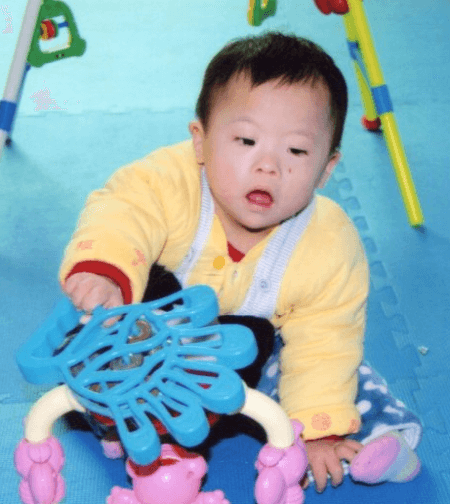 A REPORT FROM APRIL 2017 SAYS:   On admission, William is about 6 months old. He is fairly quiet and a smart little boy. He had heart surgery in 2015. After back the institute, he gets the excellent care of our caretaker and he recovers gradually. At the age of 8-10 months, he is excited to see colorful toys, can transfer from supine position to lateral position; his movement of hands and feet is strong; he can put the object into his mouth and lift his hand, can turn his head, can grasp the toy with his hands and look at his hands; he laughs when amused by his familiar people. At the age of 10-12 months, he can hold his head up for a moment while lying on the stomach; he can stare at the adult when the adult is speaking to him and can grasp the toy in his hand. At the age of 12-15 months, he can hold his head high and look at the toy in front of him while lying on the stomach; he can visually move follow the dropping object, can stretch his hands out to reach the toy in front of him; he can roll over and laughs more. At the age of 13-15 months, he can hold his head to observe the thing and people around him while lying on the stomach, can sit for a moment with his back against the support, can move his body with abdomen, can pass a toy from one hand to the other hand; sometimes he can bang two toys together and makes sounds of yiyiyaya, so lovely. At the age of 15-18 months,he can roll over freely in the activity room, can roll over to reach his favorite toys, can prop up his upper body with hands and would watch other children are playing; he laughs when happy and can look for his favorite toy; sometimes he plays with other children; he is attached to the adult; he enjoys that someone plays games with him, such as the game of touching head, listening to music, listening to other’s talking and reading picture books; he knows his name, turns when called, and crawls to you; he smiles at you when happy in order to attract your attention. Now he can sit alone steadily and can stand up with hands holding the support; he is very curious and always wants to explore what he sees; sometimes he sits on the cushion, plays with other children, then he crawls to the adult and runs to the adult’s arms, he is so lovely.