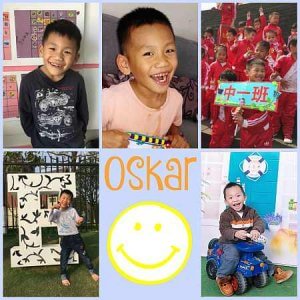 Oskar is an extroverted and handsome boy, born in July of 2010, who usually has a huge smile on his face, whether he is at home or at school! His smile is so amazing that he makes everyone around him happy just by being with him. Oskar lives with an English speaking foster family. He loves to play with other children as well as the family’s pets. He is behind other children from a motor standpoint, but his foster mother says he is very smart and points to all his body parts, can sort and stack blocks, and can problem solve. He has been receiving rehabilitation for his cerebral palsy and has continued to make gains. He has a walker and a wheelchair, but does not like to use them. He would rather hold an adult’s hand to walk. Oskar has an amazing spunk and determination. He is not speaking yet, but is learning sign language and now knows about 500 signs. This has really helped him communicate better with the adults around him. Oskar would benefit from continued use of basic sign language and speech therapy. We hope to find Oskar a family because we know he’ll not only make a great son, but that a family will be blessed daily by his presence.

September 2017 Update:    Oskar’s mental capability is like any other 7-year-old boy his age. He has CP (Cerebral Palsy). It does not affect him mentally, but it effects his walking and speaking. He also gets easier tired than other kids his age. At the end of the day he usually is so ready for bed. He is potty trained. Oskar is a very fun and active boy. He is so boy and his CP does not hold him back to want to do everything all the other boys do in his age. He is very extroverted and loves going outside. He loves sport, as in swimming, playing ball, taking walks (usually on his car). He is very competitive – which usually shows itself when we play board games. He is a very social boy and loves to hang out with his foster siblings and friends. His love language is touch. Hugging and kissing him as well as encouraging him with words of affirmation get the best out of him. Although he is usually very brave, he is afraid of the dark and won’t go anywhere if there is no light. When he came to his foster home, as a three-year-old, he had to learn what rules are and how to keep them. He has improved so much in the last four years. He sometimes still is a bit stubborn and tries to get his way through crying, but it is now much more according to his appropriate age. His foster family has found out, that if they explain to him ahead of time what will happen, why he will need to share something, why he will not be able to go along with them, why he should not do something or change his behavior, he then will obey very well.

When Oskar came to his foster home, he was only able to crawl. He now can walk by himself through the whole house. He can get up by himself and walk for a short distance. When holding onto a ladder, he can walk up some stairs. But as soon as goes out, he usually uses an electric wheelchair or a stroller to get somewhere. When they get to the place, he usually wants to get out of the wheelchair and walk around with their help. He is daily improving in his walking and his foster mom believes, that with some therapy and some support as in leg braces, he should be able to walk stable one day. But so far, he still needs support from us. His foster family is working on his fine motor skills. He still mostly scribbles. Not because he does not know his ABC, but because his fine motor skills with his hands are a bit hard for him. Last week though he wrote his name all by himself on a piece of paper, and it was readable. When his foster mom asks him to color a picture, he usually always draws out of the box. It makes him mad because he knows it should not look like that. Basically, he can pick up anything with his fingers, hold a pen, open stuff, just not draw very well. In the morning, he goes to Chinese kindergarten. In the afternoon, he is home-schooled in English, Math, and sign language (ASL). In Math, he is learning numbers from 1-20. We just started learning some addition. Books we use for him in Math as well as English are Kindergarten level (Pre K). He knows about 500 words in sign language by now, which has helped so much in communicated with him. He understands English as well as Chinese. He is very much attached to his foster mom and loves his foster siblings a lot. His social skills are good. When friends come over to play, he will find something to play with them. He especially likes hanging out with other boys his age. Even though he cannot speak, he will find a way to make them understand him. He had no problem with interacting with adults. Oskar has been living since the age of 3 in the same foster home. His foster mom is from Germany (but only speaks English to him). Before that he lived in the orphanage. He can only say a few words: mama, more, move; everything else he communicates in sign language. He can follow directions in three steps. He understands everything you say and can do it. He shares a room with his younger foster brother.

His foster mom only speaks English to him so his English is quite good. In his 4 years that he has been in his foster home, he has seen about 6 of his foster siblings being adopted. His foster mom openly talks about adoption and prepares the kids well for the possibility of being adopted. Oskar has been praying for his own mom and dad for a long time now. He understands what it means (as far as a kid can understand) and is waiting for his own mom and dad to show up. He also prays to have some siblings of his own, that will play with him. He has now even started to pray for grandparents of his own. His favorite color is green. If he plays a game it has to be green, if he gets clothes or a toy they have to be green, if he likes something it has to be green. Board games are his most favorite activity. But he also loves to play with toys, play Lego, play with superheroes, or go on outings. He also loves it to be read books to, or look at pictures books by himself. It is hard to say what his favorite toy is, since he does not have one in specific. He loves to play with cars, super heroes, look at books … any toy other boys his age would like to play with. 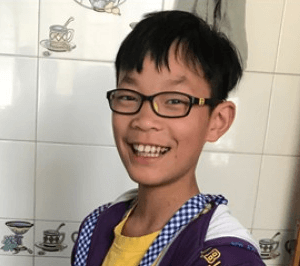