Jovie was born 2017 and is HIV positive since birth. She is able to stand up, sit down, and walks if taken by a hand. She eats and sleeps well. Jovie receives medication two times per day as part of her antivirus treatment. Jovie smiles a lot when she is spoken to, adapts in new environments and gets involved in social interactions. She is very curious and evaluates objects in her environment. She pays attention to herself by pronouncing sounds and makes syllables. Jovie is active, very eager to communicate with people she knows and recognizes “her own people” from strangers. She likes to play with the other children and toys. 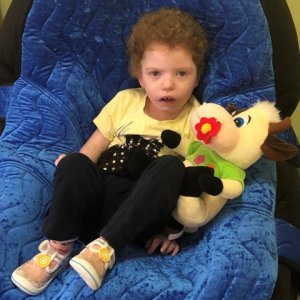