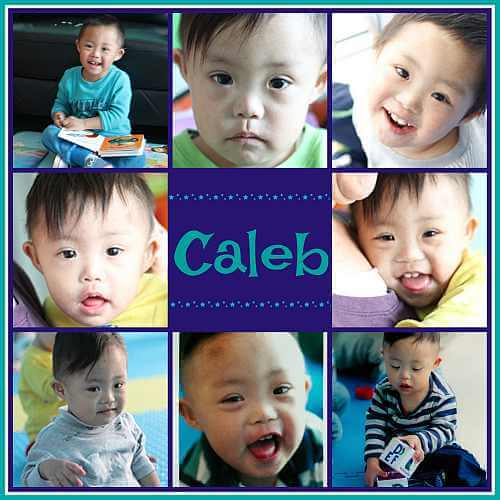 Kaleb is a handsome and happy little boy, born in April of 2014 with down syndrome and an endocrine disorder. Kaleb likes to listen to music and play games. He is described as gentle, quiet, and shy. When he needs comfort, he will ask his caregiver for a hug. Kaleb can dress himself, put shoes on, and eat with a spoon, even if he might make a mess sometimes. He moves fast and can step over small chairs, get on tables, go up and down stairs, run, and jump. He is able to say simple words such as ‘mom’, ‘thank you’, ‘bye’, and other two syllable words. Though he doesn’t go to school, he is currently attending a pre-school education class in the orphanage along with ten other children. He is able to understand and follow instructions given by the caregivers. In October of 2015, a lab test showed that his blood thyroid hormone (T4) was low. He has since been taking medication and is regularly examined. Kaleb really likes to eat sweets, such as cake, candy, and other snacks. He also enjoys playing games and can be more focused than others if he is interested. He is described as cheerful, active, and is noted to get along well with the other children.

Kaleb joined an In-Orphanage Care Center in October of 2015.  The care center hires, trains and oversees nannies caring for a designated group of children with special needs. Staff say that Kaleb has brought a lot of joy and love to their room ever since! He is a happy little fellow with a big smile and a sweet personality. He loves cuddling and is often found crawling into somebody’s lap. Kaleb has a contagious laugh and he adds so much joy wherever he goes.

There is a $1,500 agency grant for Kaleb’s adoption with his current agency. Kaleb needs a family with an approved home study to be able to hold his file or move forward with adopting him.