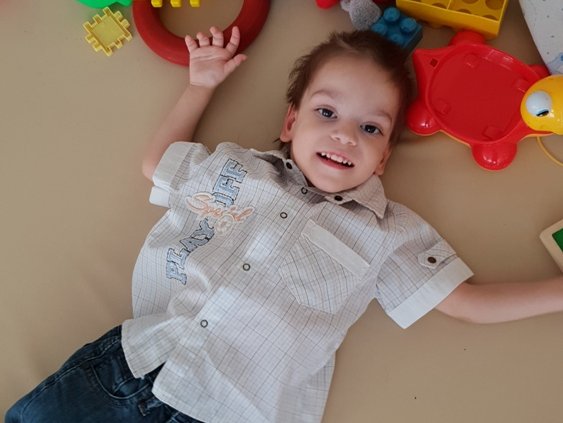 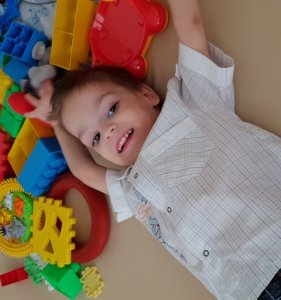 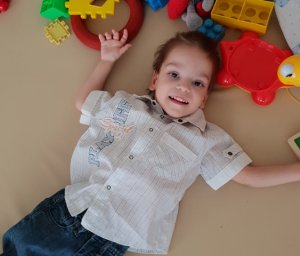 Vinny is an adorable little boy that is living in an orphanage in Eastern Europe. He has poor muscle tone and active movements. Coordination is poor as well due to walking on his toes when trying to step (with help). He is diagnosed with Cerebral Palsy. At the age of 3 months old, he began reacting to sound and looking at objects. Vinny has good control of his head and can roll on his stomach and back. He does not attempt to walk and he has trouble sitting without support. He has spastically increased muscle tone. He does well holding objects but does not pass them hand to hand, but rather to his mouth. Vinny has a good attention span and does well with recognizing individuals. His behavior is calm and very playful when being interacted with. He listens when being communicated with and tries to interact back with syllables and noises. Vinny is a picky eater and very dependent on the work staff.

Vinny can turn from his back to his belly and vice versa. He doesn’t make attempts to stand up and he is unstable when sitting without support. He has spastic muscle tone of the upper and lower extremities. He registers visual, hearing and tactile stimuli. His attention is stable if he is interested in the activity. He differentiates familiar people from strangers, recognizes voices and situations. He is happy and smiles when teased from an adult. He vocalizes and pronounces spontaneous syllables. He listens when somebody talks to him. He turns around to the source of a sound or movement. He often opens his mouth. His reaction to adults is positive – he looks at the adult and is happy.

He looks at, follows, and sometimes reaches with uncoordinated moves for toys, or tries to pick up a nearby object of interest. He grabs and holds a suitable toy (like a rattle) in his hand. He looks at it briefly, tries to swing it by moving his hand up and down, brings it to his mouth or throws it (the sound of the toy falling causes the child to laugh and repeat the action).

A CHILD for the Lafreniere family — MI Bernard Scroll to top