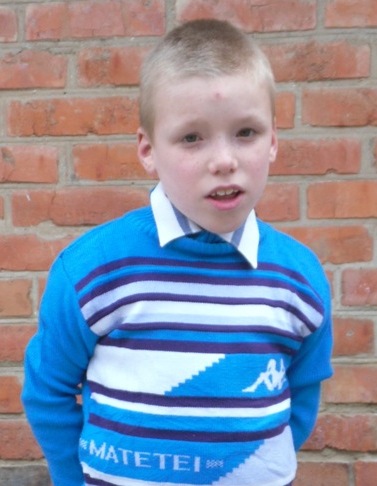 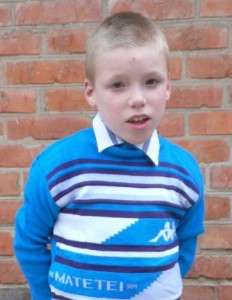 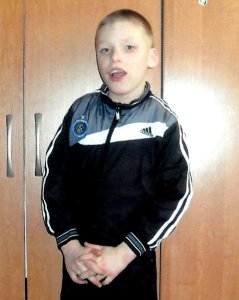 From a family who met him in July 2015:  Pearson is a Lost Boy. He lives in a horrible institution.  Pearson is nonverbal. I only heard him laugh. I never heard other sounds; that doesn’t mean that he doesn’t make them, I just never heard them while I was there. Pearson picks up quickly on things, like making a ball light up, or scribbling on the magna-doodle. He has a wonderful smile, and LOVED making his blue spiky ball light up. It is not in his file, but judged on behavior and facial features, we are pretty sure that he has FAS. We were not able to adopt Pearson because we have small children in our home, and also another son with major needs. Pearson is a beautiful boy, but he lives in a place that chews the boys up and spits them out. He was taken into government care as a baby, and has been there since. He most likely entered this institution when he was 5 or 6. That is a very long time to be neglected. It is a very long time to suffer the boredom and trauma of this place. He is very easily overstimulated. Every few minutes he is overwhelmed and his behavior reflects that. He needs constant supervision, and a home without small children. While he is very sweet and likes to throw balls, he also has a tendency to run away, break things, pull hair, head butt, spit, etc. The more he is worked with, the better his tolerance to stimulation will be. Someone without small children, and someone experienced with institutional behaviors would be best for Pearson. He is a beautiful, broken boy, who needs a mama and daddy to help him calm down, to play ball with him, and to love him and put his pieces back together that the institution broke.”

From a family who met him in Fall 2013:  Pearson is doing so good!! He is precious and sweet! I saw him from a distance every day. The first time, he was with a group of boys having their picture taken in the fall leaves. He always did what the nanny told him to. He walks very well, and he likes holding the nannies hands. My favorite day was when I walked past their group and he was right in front of me on the sidewalk, and before the nanny could move him, I bent down and in Russian told him how sweet he was. He took my face in both of his hands, and pulled me down so our foreheads were touching, and just stared in my eyes. I kissed his cheek, and his whole face lit up!! And he has the most adorable splatter of freckles! He is smaller than I would have thought too.